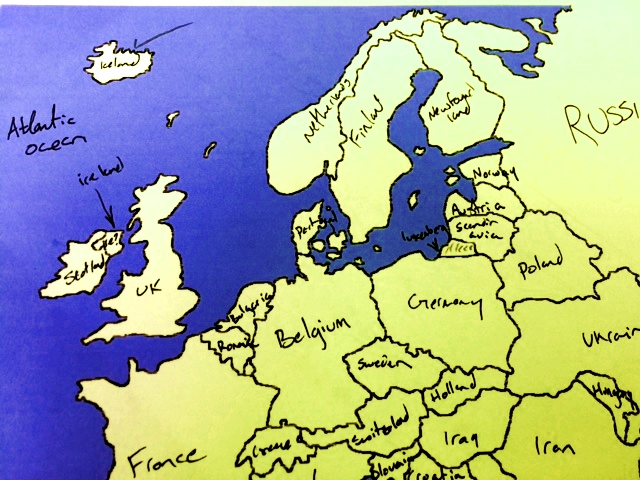 Okay. Nobody asked this one, but it’s clear to me that you should judging by the maps you’ve done so far.

It’s nice to see that someone validated Iceland there, but you have several suspects from other continents.

Don’t forget to click that tiny country nesting atop your “Germany” (aka Poland) for a chuckle.

Notice that Scotland is not on the list, because it’s not technically a separate country, but part of the United Kingdom. (Remember? We watched John Oliver have a standard conniption about Scottish Independence not too long ago).

Seriously, I give you points for kind of knowing that Scotland has a lot of coastline and is close to the U.K. And well done with Portugal and Spain!! Also, Slovania and Croatia are correct – is that from Assassin’s Creed again?

The Sheppard quizzes give you some dry facts about each country, but give it a chance. It will definitely help to think about coastlines and neighbors. Greece and Switzerland, for instance, well, are not easily confused when you know a few things about them.

I’ll start!! Swiss citizens speak French, German and/or Italian because they are surrounded by those countries. They also keep the hills alive.

I  know, it’s mean of me to make fun of you on the internets, but no one knows which kid you are. You could be anyone, Beavis.