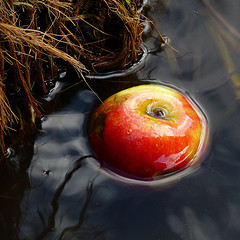 Well, as I mentioned when I was almost finished with reading the book, it has some writing flaws that nearly wrecked it for me, but only nearly. I won’t even start of the writing quibbles, because that’s been done much, much better elsewhere.

What a funny fence to be on–I had really interesting vampire dreams while I read it, so I can honestly say I have experienced a little bit of the spooky pull of her “story” (Sorry, I have to do that. “Twilight” doesn’t have much story.) and at the same time, I was uneasy about the themes she presented with such narrow focus.

The trouble with googling discussions of Meyer’s books is that spoilers are very hard to avoid.  I can’t be the last mom in the English-speaking world to read the other books.  Waitaminute.  I bet it’s been translated. Oh yeah it has.  Thirteen times.

As for Edward, he’s dead and lonely, and very very bored, which is understandable.  His motivations make more sense to me than hers do.  He’s the noble one, who preserves her virtue and her life.  It’s he who is considering her well-being and that of her parents.  She’s not.  She’s just getting drunk on undead pheromones.

But how does he persuade his vampire family to go along with his “I will not eat my human girlfriend” challenge?  How does he prevail against a more deadly adversary?  Dunno!! She didn’t write that bit of the story.  Well, eventually she covered a lot of that turf in the manuscript that was stolen, apparently.

All of this is pale marble in comparison to the obvious ick factor: he watches her sleep when she’s unaware and wants to drink her blood.

Ook!! Zoals!! It reminds me far too much of a dear friend who used to complain that she could only get excited about drug addicts.  You young things have too much to worry about already without any confusion about real love and even romance.

Love is not about appetite.  Love is about nutrition.