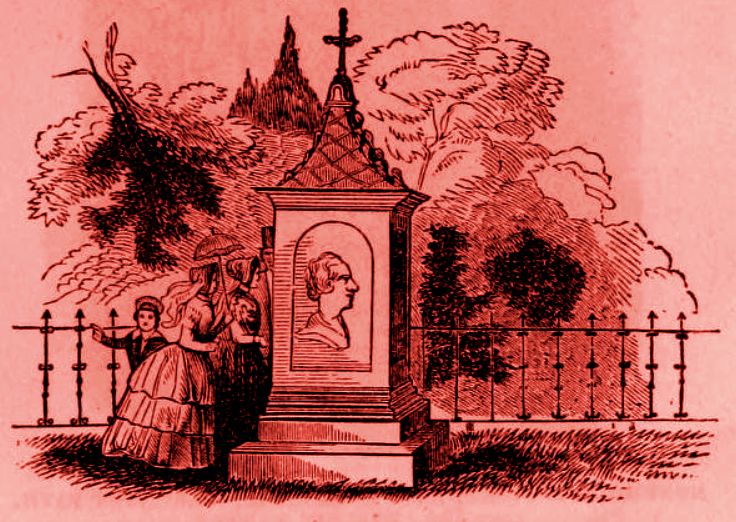 I visited a local cemetery recently to see if there were any 19th century graves and–spoiler–there were! A few of the markers were for people born in the 18th century who had the good fortune to live long enough to get buried in the 19th. I didn’t know so many people who enjoyed stone grave markers lived here back then. Ironically, they probably had relatives mining marble nearby. That might explain the profusion of fancy stones.

It’s a small wooded churchyard, and I was disappointed to see that among the ostentatious obelisks and a few nice sculptural angels there were also some toppled monuments.

Old graveyards have problems with settling earth and shifting stones, so when you see some worn old stones angling in odd directions, it’s probably just the actions of time and weather. Don’t let your imagination run off and give you zombie anxiety. You have enough real troubles to worry about, now don’t you? Those superstitions were planted for good reasons, but you don’t have to let them get you down.

A mildly neglected burial ground is a beautiful thing, at least to some of us, but it’s disturbing to see them mismanaged and abused. They should be like eerie parks, not places were there’s just more evidence of living humans being terrible.

Cavorting has gone on in cemeteries as long as they have existed. Can you imagine the hijinks that slightly-less-ancient Egyptian teens got up to? Teens enjoy cemeteries because of the privacy and the ample opportunity to spook each other. When I was a teen, we hung out in graveyards, but I usually refused to get out of the car and certainly never disturbed any of the permanent residents. I was too busy being cool, anyhow.

I mean, I get the idea of playing cards and drinking beer in the cemetery, but “four small boys”? Playing ball is fine, but knocking the tombstones over is just vandalism at its worst. Maybe one little boy was angry about losing the card game or another was piqued that they ran out of beer? Even so, that’s no excuse for a small boy riot.

Even if you are free of all superstitions and are not terribly bothered by the idea of disrupting graves, there are plenty of people who are bothered by it. Repairs are very difficult and expensive, and one teen rampage can wreck a budget for a small cemetery. The dead folks aren’t paying rent any longer, after all.

It’s not clear how this civil war veteran’s grave was damaged, but the work needed to do a proper repair and restoration is quite something: Rufus and Little Pinkey King monument gets repaired.

If you think about it, we have a lot more people milling around on the surface these days than we have historic grave stones. Maybe do a little preservation for Halloween. Pull a weed! Remove some evil!

Here’s my terrible video record. As evidence of my amateur camera work you can spot my very vivid sneakers. Pro tip: always wear sneakers in the graveyard, just in case.

One Reply to “A Few Words on Cemetery Problems”